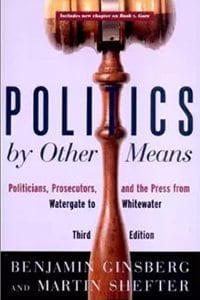 As scandals increasingly dominate the political agenda, Benjamin Ginsberg and Martin Shefter argue in this illuminating book, the United States is entering an era of postelectoral politics, with media revelations, congressional investigations, and judicial proceedings replacing elections as the primary tools of political competition.

In a far-reaching shift of the political landscape, contenders now seek to discredit or take hostage their opponents rather than to expand the electorate or otherwise compete for votes.

In this new edition, which includes a full chapter on the politics of Bush v. Gore, the authors discuss the long-term significance of the decline of electoral competition: voters are increasingly alienated, the government’s effectiveness is weakened, and the democratic process is threatened.