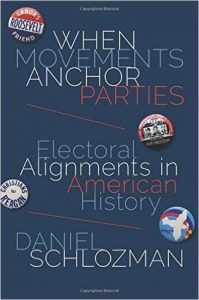 Throughout American history, some social movements, such as organized labor and the Christian Right, have forged influential alliances with political parties, while others, such as the antiwar movement, have not. When Movements Anchor Parties provides a bold new interpretation of American electoral history by examining five prominent movements and their relationships with political parties.

Taking readers from the Civil War to today, Daniel Schlozman shows how two powerful alliances—those of organized labor and Democrats in the New Deal, and the Christian Right and Republicans since the 1970s—have defined the basic priorities of parties and shaped the available alternatives in national politics. He traces how they diverged sharply from three other major social movements that failed to establish a place inside political parties—the abolitionists following the Civil War, the Populists in the 1890s, and the antiwar movement in the 1960s and 1970s. Moving beyond a view of political parties simply as collections of groups vying for preeminence, Schlozman explores how would-be influencers gain influence–or do not. He reveals how movements join with parties only when the alliance is beneficial to parties, and how alliance exacts a high price from movements. Their sweeping visions give way to compromise and partial victories. Yet as Schlozman demonstrates, it is well worth paying the price as movements reorient parties’ priorities.