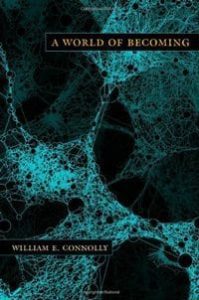 In A World of Becoming William E. Connolly outlines a political philosophy suited to a world whose powers of creative evolution include and exceed the human estate. This is a world composed of multiple interacting systems, including those of climate change, biological evolution, economic practices, and geological formations. Such open systems, set on different temporal registers of stability and instability, periodically resonate together to produce profound, unpredictable changes. To engage such a world reflectively is to feel pressure to alter established practices of politics, ethics, and spirituality. In pursuing such a course, Connolly draws inspiration from philosophers such as Maurice Merleau-Ponty, Alfred North Whitehead, and Gilles Deleuze, as well as the complexity theorist of biology Stuart Kauffman and the theologian Catherine Keller.

Attunement to a world of becoming, Connolly argues, may help us address dangerous resonances between global finance capital, cross-regional religious resentments, neoconservative ideology, and the 24-hour mass media. Coming to terms with subliminal changes in the contemporary experience of time that challenge traditional images can help us grasp how these movements have arisen and perhaps even inspire creative counter-movements. The book closes with the chapter “The Theorist and the Seer,” in which Connolly draws insights from early Greek ideas of the Seer and a Jerry Lewis film, The Nutty Professor, to inform the theory enterprise today.