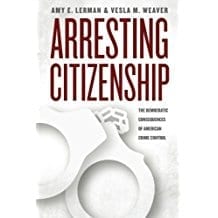 Never before has American government exhibited so strong an urge to punish, and so vast a network of institutions dedicated to the control, confinement and supervision of its citizens. Citizen contact with criminal justice is unmatched in American history and around the world.  How does our view of American democracy change once we account for the growth of its punitive apparatus? How do citizens experience government and democratic citizenship when the most visible face of the state is punitive?

In this book, we argue that the modern criminal justice system embodies a set of values that are antithetical to democratic norms.

Through the detailed narratives of over one hundred custodial citizens, along with careful analyses of large-scale survey data, we demonstrate that contact with police, courts, prisons and jails produces a “carceral lifeworld”—a particular sense of the state, conception of citizenship, and orientation toward the democratic polity. The result of criminal justice contact is decreased trust in political institutions and a reduced faith that the state will respond to the will of the people. Worse, custodial citizens not only disengage and feel disempowered, they actively fear and avoid interactions with government.

At the same time, contact with criminal justice shapes citizens’ racial transcripts, constructing ideas not only about blacks in custody, but about the condition of blacks in America—perceptions of their worth, standing, and citizenship. Blacks who undergo law enforcement interventions are more pessimistic about racial equality in America.

Our focus is not simply criminal justice as a distinct policy domain, separable from American governance more broadly. Our inquiry must instead also prompt us to revisit core assumptions about the character of the American state and the increasingly defining role of its least democratic institutions. Our central claim is that the growth of criminal justice has fundamentally recast the citizen-state relationship.