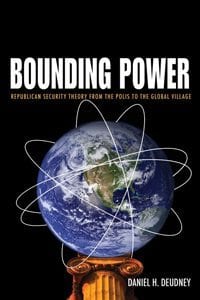 Realism, the dominant theory of international relations, particularly regarding security, seems compelling in part because of its claim to embody so much of Western political thought from the ancient Greeks to the present. Its main challenger, liberalism, looks to Kant and nineteenth-century economists. Despite their many insights, neither realism nor liberalism gives us adequate tools to grapple with security globalization, the liberal ascent, and the American role in their development. In reality, both realism and liberalism and their main insights were largely invented by republicans writing about republics.

The main ideas of realism and liberalism are but fragments of republican security theory, whose primary claim is that security entails the simultaneous avoidance of the extremes of anarchy and hierarchy, and that the size of the space within which this is necessary has expanded due to technological change.

In Daniel Deudney’s reading, there is one main security tradition and its fragmentary descendants. This theory began in classical antiquity, and its pivotal early modern and Enlightenment culmination was the founding of the United States. Moving into the industrial and nuclear eras, this line of thinking becomes the basis for the claim that mutually restraining world government is now necessary for security and that political liberty cannot survive without new types of global unions.

Unique in scope, depth, and timeliness, Bounding Power offers an international political theory for our fractious and perilous global village.