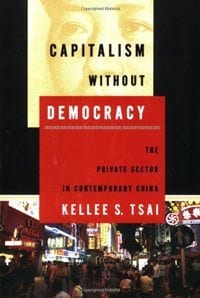 Over the past three decades, China has undergone a historic transformation. Once illegal, its private business sector now comprises 30 million businesses employing more than 200 million people and accounting for half of China’s Gross Domestic Product. Yet despite the optimistic predictions of political observers and global business leaders, the triumph of capitalism has not led to substantial democratic reforms.

In Capitalism without Democracy, Kellee S. Tsai focuses on the activities and aspirations of the private entrepreneurs who are driving China’s economic growth. The famous images from 1989 of China’s new capitalists supporting the students in Tiananmen Square are, Tsai finds, outdated and misleading. Chinese entrepreneurs are not agitating for democracy. Most are working eighteen-hour days to stay in business, while others are saving for their one child’s education or planning to leave the country. Many are Communist Party members. “Remarkably,” Tsai writes, “most entrepreneurs feel that the system generally works for them.”

Tsai regards the quotidian activities of Chinese entrepreneurs as subtler and possibly more effective than voting, lobbying, and protesting in the streets. Indeed, major reforms in China’s formal institutions have enhanced the private sector’s legitimacy and security in the absence of mobilization by business owners. In discreet collaboration with local officials, entrepreneurs have created a range of adaptive informal institutions, which in turn, have fundamentally altered China’s political and regulatory landscape. Based on years of research, hundreds of field interviews, and a sweeping nationwide survey of private entrepreneurs funded by the National Science Foundation, Capitalism without Democracy explodes the conventional wisdom about the relationship between economic liberalism and political freedom.