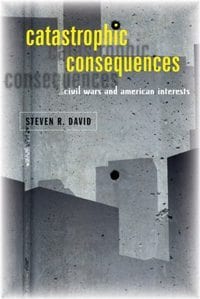 Civil war and other types of radical domestic upheaval are replacing international war as the preeminent threat to American security and economic well being, according to Steven R. David. Catastrophic Consequences argues that civil conflicts are of even greater importance than deliberate efforts to harm the United States because the damage they inflict is unintended and therefore impossible to deter.

David examines the prospects for and potential aftereffects of instability in four nations vital to U.S. national interests—Saudi Arabia, Pakistan, China, and Mexico. It is not, he argues, a rising China that threatens America, but one that is falling apart. Likewise, it is not a hostile Pakistani regime over which the United States should worry, rather it is one that cannot keep the country together. Similarly, a conflict-torn Mexico or Saudi Arabia poses a far greater danger to America than does either of those states growing stronger.

In assessing these threats, David contends that the United States’s only viable option is to view other-state civil upheaval similarly to natural disasters and to develop a coherent, effective emergency response mechanism, which does not exist today in any systemic, nationwide form.