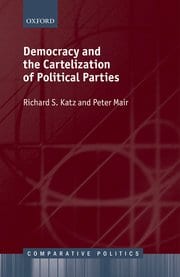 Political parties have long been recognized as essential institutions of democratic governance. Both the organization of parties, and their relationships with citizens, the state, and each other have evolved since the rise of liberal democracy in the 19th and early 20th centuries. Going into the 21st century, it appears that parties losing popular support, putting both parties, and potentially democracy, in peril. This book traces the evolution of parties from the model of the mass party, through the catch-all party model, to argue that by the late 20th century the principal governing parties and (and their allied smaller parties – collectively the political ‘mainstream’) were effectively forming a cartel, in which the form of competition might remain, and indeed even appear to intensify, while its substance was increasingly hollowed out. The spoils of office were increasingly shared rather than restricted to the temporary winners; contentious policy questions were kept off the political agenda, and competition shifted from large questions of policy to minor questions of managerial competence. To support this cartel, the internal arrangements of parties changed to privilege the party in public office over the party on the ground. The unintended consequence has been to stimulate the rise of extra-cartel challengers to these cozy arrangements in the form of anti-party-system parties and populist oppositions on the left, but especially on the right.