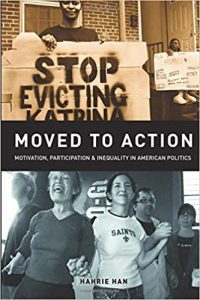 Wealthy, educated, and more privileged people are more likely to participate and be represented in politics than their poorer, less educated, and less privileged counterparts. To reduce these inequalities, we need a better understanding of how the disadvantaged become motivated to participate. Moved to Action fills the current gap in this area of research by examining the commitments and pathways through which the underprivileged become engaged in politics. Drawing on original, in-depth interviews with political activists and large-scale survey data, author Hahrie C. Han contests the traditional idea that people must be politicized before they participate and that only idiosyncratic factors outside the control of the political system can drive motivation. Her findings show that that highly personal commitments, such as the quality of children’s education or the desire to help a friend, have a disproportionately large impact in motivating political participation among people with fewer resources. Han makes the case that civic and political organizations can lay the foundation for greater citizen participation by helping people recognize the connections between their personal commitments and politics.