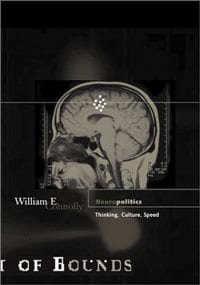 Why would a political theorist venture into the nexus between neuroscience and film? According to William Connolly-whose new book is itself an eloquent answer-the combination exposes the ubiquitous role that technique plays in thinking, ethics, and politics. By taking up recent research in neuroscience to explore the way brain activity is influenced by cultural conditions and stimuli such as film technique, Connolly is able to fashion a new perspective on our attempts to negotiate-and thrive-within a deeply pluralized society whose culture and economy continue to quicken.

In Neuropolitics Connolly draws upon recent brain/body research to explore the creative potential of thinking, the layered character of culture, the cultivation of ethical sensibilities, and the critical role of technique in all three. He then shows how a series of films-including Vertigo, Five Easy Pieces, and Citizen Kane-enhances our appreciation of technique and contests the linear image of time now prevalent in cultural theory.

Connolly deftly brings these themes together to support an ethos of deep pluralism within the democratic state and a politics of citizen activism across states. His book is an original and rigorous study that attends to the creative possibilities of thinking in identity, culture, and ethics.