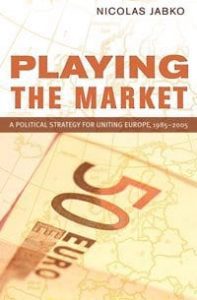 In the 1980s and 1990s, Nicolas Jabko suggests, the character of European integration altered radically, from slow growth to what he terms a “quiet revolution.” In Playing the Market, he traces the political strategy that underlay the move from the Single Market of 1986 through the official creation of the European Union in 1992 to the coming of the euro in 1999. The official, shared language of the political forces behind this revolution was that of market reforms—yet, as Jabko notes, this was a very strange “market” revolution, one that saw the building of massive new public institutions designed to regulate economic activity, such as the Economic and Monetary Union, and deeper liberalization in economic areas unaffected by external pressure than in truly internationalized sectors of the European economy.

What held together this remarkably diverse reform movement? Precisely because “the market” wasn’t a single standard, the agenda of market reforms gained the support of a vast and heterogeneous coalition. The “market” was in fact a broad palette of ideas to which different actors could appeal under different circumstances. It variously stood for a constraint on government regulations, a norm by which economic activities were (or should be) governed, a space for the active pursuit of economic growth, an excuse to discipline government policies, and a beacon for new public powers and rule-making. In chapters on financial reform, the provision of collective services, regional development and social policy, and economic and monetary union, Jabko traces how a coalition of strange bedfellows mobilized a variety of market ideas to integrate Europe.