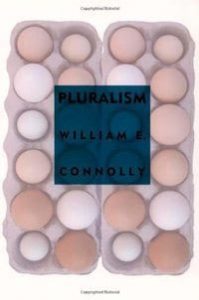 Over the past two decades, the renowned political theorist William E. Connolly has developed a powerful theory of pluralism as the basis of a territorial politics. In this concise volume, Connolly launches a new defense of pluralism, contending that it has a renewed relevance in light of pressing global and national concerns, including the war in Iraq, the movement for a Palestinian state, and the fight for gay and lesbian rights. Connolly contends that deep, multidimensional pluralism is the best way to promote justice and inclusion without violence. He advocates a deep pluralism—in contrast to shallow, secular pluralism—that helps to create space for different groups to bring their religious faiths into the public realm. This form of deep pluralism extends far beyond faith, encompassing multiple dimensions of social and personal lives, including household organization and sexuality.

Connolly looks at pluralism not only in light of faith but also in relation to evil, ethics, relativism, globalization, and sovereignty. In the process, he engages many writers and theorists—among them, Spinoza, William James, Henri Bergson, Marcel Proust, Gilles Deleuze, Giorgio Agamben, Talal Asad, Michael Hardt, and Antonio Negri. Pluralism is the first book in which Connolly explains the relationship between pluralism and the experience of time, and he offers readings of several films that address how time is understood, including Time Code, Far from Heaven, Waking Life, and The Maltese Falcon. In this necessary book Connolly brings a compelling, accessible philosophical critique together with his personal commitment to an inclusive political agenda to suggest how we might—and why we must—cultivate pluralism within both society and ourselves.