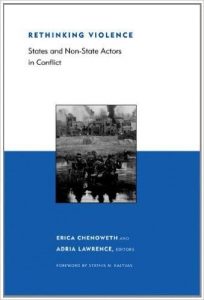 States, nationalist movements, and ethnic groups in conflict with one another often face a choice between violent and nonviolent strategies. Although major wars between sovereign states have become rare, contemporary world politics has been rife with internal conflict, ethnic cleansing, and violence against civilians. This book asks how, why, and when states and non-state actors use violence against one another, and examines the effectiveness of various forms of political violence.

In the process of addressing these issues, the essays make two conceptual moves that illustrate the need to reconsider the way violence by states and non-state actors has typically been studied and understood. The first is to think of violence not as dichotomous, as either present or absent, but to consider the wide range of nonviolent and violent options available and ask why actors come to embrace particular strategies. The second is to explore the dynamic nature of violent conflicts, developing explanations that can account for the eruption of violence at particular moments in time. The arguments focus on how changes in the balance of power between and among states and non-state actors generate uncertainty and threat, thereby creating an environment conducive to violence. This innovative way of understanding violence deemphasizes the role of ethnic cleavages and nationalism in modern conflict.