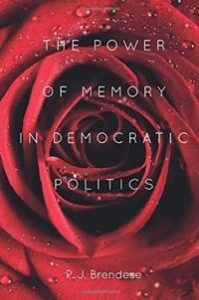 George Orwell famously argued that those who control the past control the future, and those who control the present control the past. In this study of the relationship between democracy and memory, P. J. Brendese examines Orwell’s insight, revealing how political power affects what is available to be remembered, who is allowed to recall the past, and when and where past events can be commemorated. Engaging a diverse panoply of thinkers that includes Sophocles, Friedrich Nietzsche, Jacques Derrida, James Baldwin, and Toni Morrison, Brendese considers the role of disavowed memory and the politics of collective memory in democratic processes throughout history. Among the cases treated are democracy in ancient Athens, South Africa’s effort to transition from apartheid via its landmark Truth and Reconciliation Commission, Mexico’s struggle to fortify democratic accountability after the “dirty war,” and the unresolved legacy of slavery in US race relations. The Power of Memory in Democratic Politics draws on these national histories to develop a theory of memory that accounts for the ways the past lives on in unconscious, habituated practices, shaping the possibilities of freedom, action, and political imagination.