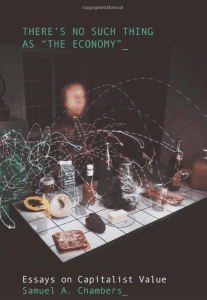 Every Economics textbook today teaches that questions of values and morality lie outside of, are in fact excluded from, the field of Economics and its proper domain of study, “the economy.” Yet the dominant cultural and media narrative in response to major economic crisis is almost always one of moral outrage. How do we reconcile this tension or explain this paradox by which Economics seems to have both everything and nothing to do with values?

The discipline of modern economics hypostatizes and continually reifies a domain it calls “the economy”; only this epistemic practice makes it possible to falsely separate the question of value from the broader inquiry into the economic. And only if we have first eliminated value from the domain of economics can we then transform stories of financial crisis or massive corporate corruption into simple tales of ethics.

But if economic forces establish, transform, and maintain relations of value then it proves impossible to separate economics from questions of value, because value relations only come to be in the world by way of economic logics. This means that the “positive economics” spoken of so fondly in the textbooks is nothing more than a contradiction in terms, and as this book demonstrates, there’s no such thing as “the economy.” To grasp the basic logic of capital is to bring into view the unbreakable link between economics and value.