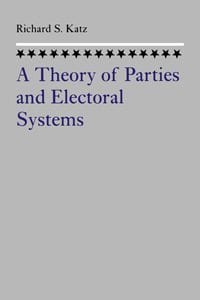 Political parties and elections are the mainsprings of modern democracy. In this classic volume, Richard S. Katz explores the problem of how a given electoral system affects the role of political parties and the way in which party members are elected. He develops and tests a theory of the differences in the cohesion, ideological behavior, and issue orientation of Western parliamentary parties on the basis of the electoral systems under which they compete. A standard in the field of political theory and thought,  The Theory of Parties and the Electoral System contributes to a better understanding of parliamentary party structures and demonstrates the wide utility of the rationalistic approach for explaining behavior derived from the self-interest of political actors.