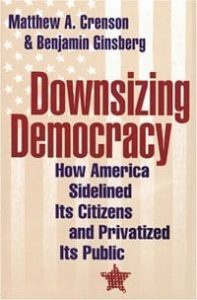 In  Downsizing Democracy, Matthew A. Crenson and Benjamin Ginsberg describe how the once powerful idea of a collective citizenry has given way to a concept of personal, autonomous democracy. Today, political change is effected through litigation, lobbying, and term limits, rather than active participation in the political process, resulting in narrow special interest groups dominating state and federal decision-making. At a time when an American’s investment in the democratic process has largely been reduced to an annual contribution to a political party or organization,  Downsizing Democracy offers a critical reassessment of American democracy.