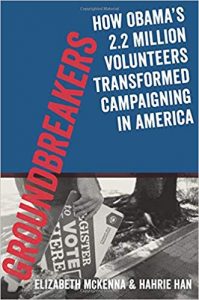 Much has been written about the historic nature of the Obama campaign. The multi-year, multi-billion dollar operation elected the nation’s first black president, raised and spent more money than any other election effort in history, and built the most sophisticated voter targeting technology ever before used on a national campaign. What is missing from most accounts of the campaign is an understanding of how Obama for America recruited, motivated, developed, and managed its formidable army of 2.2 million volunteers. Unlike previous field campaigns that drew their power from staff, consultants, and paid canvassers, the Obama campaign’s capacity came from unpaid local citizens who took responsibility for organizing their own neighborhoods months–and even years–in advance of election day. In so doing, Groundbreakers argues, the campaign engaged citizens in the work of practicing democracy. How did they organize so many volunteers to produce so much valuable work for the campaign? This book describes how.

Elizabeth McKenna and Hahrie Han argue that the legacy of Obama for America extends beyond big data and micro-targeting; it also reinvigorated and expanded traditional models of field campaigning. Groundbreakers makes the case that the Obama campaign altered traditional ground games by adopting the principles and practices of community organizing. Drawing on in-depth interviews with OFA field staff and volunteers, this book also argues that a key achievement of the OFA’s field organizing was its transformative effect on those who were a part of it. Obama the candidate might have inspired volunteers to join the campaign, but it was the fulfilling relationships that volunteers had with other people–and their deep belief that their work mattered for the work of democracy–that kept them active.

Groundbreakers documents how the Obama campaign has inspired a new way of running field campaigns, with lessons for national and international political and civic movements.