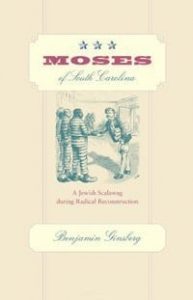 Franklin Moses Jr. is one of the great forgotten figures in American history. Scion of a distinguished Jewish family in South Carolina, he was a firebrand supporter of secession and an officer in the Confederate army. Moses then reversed course. As Reconstruction governor of South Carolina, he shocked and outraged his white constituents by championing racial equality and socializing freely with former slaves. Friends denounced him, his family disowned him, and enemies ultimately drove him from his home state.

In Moses of South Carolina, Benjamin Ginsberg rescues this protean figure and his fascinating story from obscurity. Though Moses was far from a saint—he was known as the “robber governor” for his corrupt ways—Ginsberg suggests that Moses nonetheless deserves better treatment in the historical record. Despite his moral lapses, Moses launched social programs, integrated state institutions, and made it possible for blacks to attend the state university.

As a Jew, Moses grew up on the fringe of southern plantation society. After the Civil War, Moses envisioned a culture different from the one in which he had been raised, one that included the newly freed slaves. From the margins of southern society, Franklin Moses built America’s first black-Jewish alliance, a model, argues Ginsberg, for the coalitions that would help reshape American politics in the decades to come.

Revisiting the story of the South’s “most perfect scalawag,” Ginsberg contributes to a broader understanding of the essential role southern Jews played during the Civil War and Reconstruction.