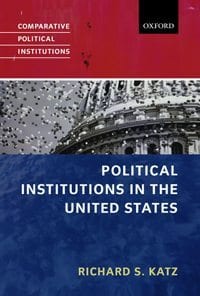 Political Institutions in the United States guides students through the different institutions of American government. It covers the electoral and party systems, the separation of powers between the executive, legislative, and judicial branches of government, and the division of powers between the federal government and the states. It also explores the internal organization of each institution. This unique text gives students a solid understanding of the “rules” of the American political game, the “field” on which the game is played, and the basic characteristics and orientations of the “teams” that are playing the game. It enables students to study contemporary American politics with greater understanding, and to see the differences between the government of the United States and the governments of other democracies.