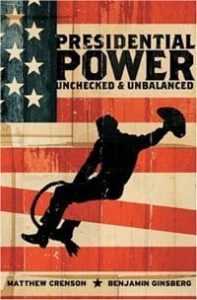 Recent presidents have exploited the power of the American presidency more fully than their predecessors—and with greater consequence than the framers of the Constitution anticipated.

This book, in the tradition of Arthur Schlesinger’s great work The Imperial Presidency (1973), explores how American presidents—especially those of the past three decades—have increased the power of the presidency at the expense of democracy. Matthew Crenson and Benjamin Ginsberg provide a fascinating history of this trend, showing that the expansion of presidential power dates back over one hundred years. Presidential Power also looks beyond the president’s actions in the realm of foreign policy to consider other, more hidden, means that presidents have used to institutionalize the power of the executive branch.