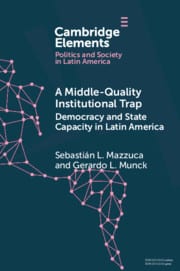 Latin America is currently caught in a middle-quality institutional trap, combining flawed democracies and low-to-medium capacity States. Yet, contrary to conventional wisdom, the sequence of development – Latin America has democratized before building capable States – does not explain the region’s quandary. States can make democracy, but so too can democracy make States. Thus, the starting point of political developments is less important than whether the State-democracy relationship is a virtuous cycle, triggering causal mechanisms that reinforce each other. However, the State-democracy interaction generates a virtuous cycle only under certain macroconditions. In Latin America, the State-democracy interaction has not generated a virtuous cycle: problems regarding the State prevent full democratization and problems of democracy prevent the development of state capacity. Moreover, multiple macroconditions provide a foundation for this distinctive pattern of State-democracy interaction. The suboptimal political equilibrium in contemporary Latin America is a robust one.