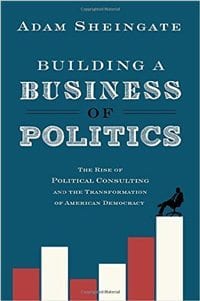 Political races in the United States rely heavily on highly paid political consultants who carefully curate the images of politicians, advise candidates on polling and analytics, and shape voters’ perceptions through marketing and advertising techniques. More than half of the $6 billion spent in the 2012 election went to consultants who controlled virtually every aspect of the campaigns, from polling, fundraising, and media to more novel techniques of social media and micro-targeting. These consultants play a central role in political campaigns-determining not only how the public sees politicians, but also how politicians see the public.

In Building a Business of Politics, author Adam Sheingate traces the history of political consultants from its origins in the publicity experts and pollsters of the 1920s and 1930s to the strategists and media specialists of the 1970s who transformed political campaigns into a highly profitable business. Today, consultants command a hefty fee from politicians as they turn campaign cash from special interest groups and wealthy donors into advertisements, polls, and direct mail solicitations characteristic of modern campaigns.

The implications of this system on the state of American democracy are significant: the rise of the permanent campaign brings with it the rise of a permanent campaign industry. A professional political class stands between the voters and those who claim to represent them, influencing messages on both sides. Sheingate not only shows how political consultants have reshaped politics, though; he also covers recent developments like the commercialization of digital campaign tools and the consolidation of the political consulting industry into global media conglomerates. Building a Business of Politics is both a definitive account of the consulting profession and a powerful reinterpretation of how political professionals reshaped American democracy in the modern era.