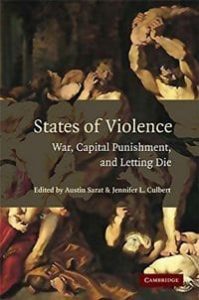 The book brings together scholarship on three different forms of state violence, examining each for what it can tell us about the conditions under which states use violence and the significance of violence to our understanding of states. The contributors to this book demonstrate that states of violence thus have a history and sociology. Yet wherever the state acts violently, the legitimacy of its acts must be engaged with the real facts of war, capital punishment, and the ugly realities of death. This book calls into question the legitimacy of state uses of violence and mounts a sustained effort at interpretation, sense making, and critique. It suggests that condemning the state’s decisions to use lethal force is not a simple matter of abolishing the death penalty or – to take another exemplary example of the killing state – demanding that the state engage only in just (publicly declared and justified) wars, pointing out that even such overt instances of lethal force are more elusive as targets of critique than one might think. Indeed, altering such decisions may do little to change the essential relationship of the state to violence. To change that relationship we must also attend to the violent state as a state of mind, a state of mind that is not just a social or psychological condition but also a moral commitment and/or a philosophical position.