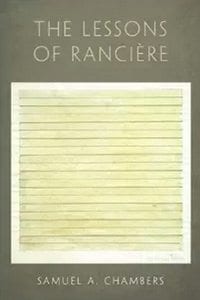 “Liberal democracy” is the name given to a regime that much of the world lives in or aspires to, and both liberal and deliberative theorists focus much of their intellectual energy on working to reshape and perfect this regime. But what if “liberal democracy” were a contradiction in terms?

Taking up Jacques Rancière’s polemical claim that democracy is not a regime, Samuel A. Chambers argues that liberalism and democracy are not complementary, but competing forces. By way of the most in-depth and rigorous treatment of Rancière’s writings to date, The Lessons of Rancière seeks to disentangle democracy from liberalism. Liberalism is a logic of order and hierarchy, of the proper distribution of responsibilities and rights, whereas democratic politics follows a logic of disordering that challenges and disrupts any claims that the allocation of roles could be complete. This book mobilizes a Rancièrean understanding of politics as leverage against the tendency to collapse democracy into the broader terms of liberalism. Chambers defends a vision of “impure” politics, showing that there is no sphere proper to politics, no protected political domain. The job of political theory is therefore not to say what is required in order for politics to occur, not to develop ideal “normative” models of politics, and not even to create new political ontologies. Instead, political theory is itself an enactment of politics in Rancière’s sense of dissensus: politics thwarts any social order of domination. Chambers shows that the logic of politics depends on the same principle as Rancière’s radical pedagogy: the presupposition of equality. Like traditional critical theory, traditional pedagogy relies on a model of explanation in which the student is presumed to be blind. But what if anyone can understand without additional explanation from a master? The Lessons of Rancière uses this pedagogy as a guide to envision a critical theory beyond blindness and to explore a democratic politics beyond liberalism.